“Without giving us a glimpse at what lay underneath the garish costumes, this Party never even gets started.” 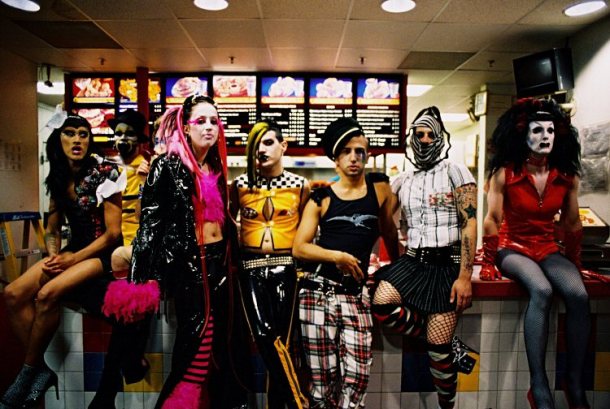 Club Kid pic has style to spare but no substance

From the beginning, Party Monster has faced an unenviable challenge here in New York. True, giddy glamsters have created a mildly feverish pre-opening buzz around this dramatized version of the Michael Alig “Clubland Murder” saga. Still, there’s been a vast amount of skepticism regarding not only the film’s potential romanticization of the grisly story, but also about the dramatic abilities of the film’s star, Macaulay Culkin, who returns to the screen after a decade-long hiatus to perform in his first “adult” role…if a deluding, delusional hedonist and drug-addled murderer like Alig can rightfully be called an adult, that is.

But the film’s main obstacle is actually a matter of timing: the story – as obscenely filmworthy as it is – is just too recent for its own good. Too many potential ticket-buyers witnessed the events firsthand back in the early ‘90s. Aging club-kids, die-hard disco divas, former bridge-and-tunnel Tunnel devotees – all are a little too familiar with the facts to be lulled into an unnecessary suspension of disbelief. They know the players. They know the setting. And they’re not going to accept any sort of bland revisionist history, a la the recent unbearable James Woods telepic about Rudy Giuliani.

Sadly, that’s just what they get with Party Monster. Part of the problem lies with the source material, the book “Disco Bloodbath” by James St. James, Alig’s mentor and fellow Club Kid. One one hand, since this is St. James’s account, the story spins decidedly in his own  favor. On the other, since Alig is a close friend, St. James clearly strives to imbue Alig with more pathos than he probably deserves.

It doesn’t help that co-writer/directors Fenton Bailey and Randy Barbato explored the exact same subject in a 1998 documentary, also called Party Monster. This newer version marks the first dramatic feature by the award-winning documentarians, whose previous films include The Eyes of Tammy Faye, Drop Dead Gorgeous, and The Real Ellen. They’d be better off sticking to documentaries; as evidenced here, their skills at dramatic narrative are sorely lacking.

Which probably explains why the duo relies so heavily on techniques better suited to documentary filmmaking. The action starts with St. James (an overly nasal but otherwise gamely glam Seth Green) addressing the camera directly. From there, St. James and Alig (Culkin) vie for the camera’s attention in order to recount their own version of the tale. Throughout, narration takes over in the innumerable instances where plot development falls short. Handheld camerawork, grainy cinematography, and a tinkly musical score add to the docu-like tone.

The film touches on all the highlights of Alig’s rise from obscurity to notoriety, without offering much insight along the way. An outcast in his midwestern hometown, Alig moves to New York and manages to befriend St. James, already a nightlife fixture. Alig quickly surpasses his more established pal to become the King of the Club Kids. “Don’t ask me why,” says St. James in one of countless voiceovers, referring to Alig’s success at promoting a heretofore unpopular nightspot, “but it clicked.” Such blithe – and uninformative – storytelling raises a compelling question: if this is the best Bailey and Barbato can do, did this material really need to be revisited?

Nevertheless, there it is, in its simplistic and strangely uninvolving glory: Alig’s incredible rise, his “father-son” relationship with nightclub impresario Peter Gatien (Dylan McDermott, a tad too dashing in his Captain Hook eye patch), his descent into drug-fueled depravity, and, in the end, the murder of drug dealer Angel Melendez (Wilson Cruz), which became an open secret for weeks among the denizens of New York nightlife before landing Alig in prison for manslaughter.

To his credit, Culkin delves enthusiastically into his role, mincing and strutting with great aplomb. It’s never clear, though, if he and Green are playing their respective characters or merely parodying them. More than anything, they both seem to be impersonating Tallulah Bankhead, adopting a bizarre, slightly English accent while engaging in an endless back-and-forth of excruciatingly witty repartee and banal banter.

To say these larger-than-life characters are always on would be a severe understatement. And that, more than anything else, is the film’s ultimate undoing. Everybody knows a drag queen – or even a club kid – takes the makeup off every now and then. But not here. And no matter how faithfully Bailey and Barbato have recreated The Limelight and Tunnel, no matter how many original costumes they’ve scrounged up, no matter how many former club kids they’ve scattered throughout the background (Look! There’s Richie Rich! Hey! There’s Amanda Lepore!), without giving us a glimpse at what lay underneath the garish costumes, this Party never even gets started.