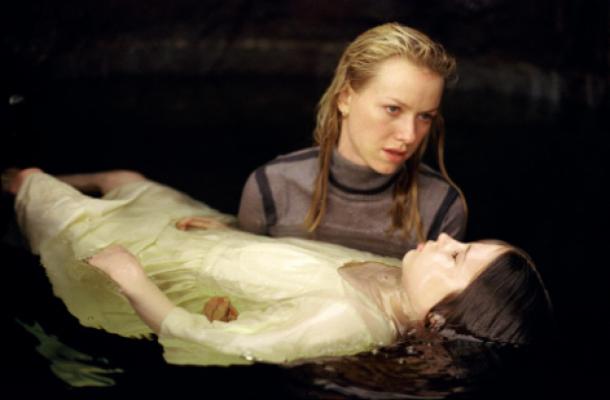 A remake of the most popular Japanese horror flick of all time, The Ring centers around a mysterious videotape that causes viewers to die precisely seven days after watching it. After exposing the tape’s contents (a hysterical mixture of surrealist imagery and pretentious experimentalism) to herself and her loved ones, an investigative reporter (Naomi Watts) has only a week to track down the tape’s origins and, hopefully, avert death.

It’s certainly an original premise. Sadly, it’s not matched with any originality in its execution. As the film opens – on a dark and stormy night, natch’ – two teenaged girls are home alone when the phone rings ever so ominously. Turns out one of them had watched the tape exactly a week before, and the time had come to pay the piper.

The opening scene alone overflows with horror-movie clichés. From there, the film touches on every single one in the book:  a creepy little boy with paranormal abilities, a deserted cabin in the woods, a possessed television, and the spooky halls of an ancient insane asylum. And on and on, ad naseum, all the way through three endings, one of which rips off the master of psychological thrillers, Alfred Hitchcock himself.

It doesn’t help matters that the clues to the unfolding mystery provide more questions than answers. Why have only teenagers been aware of the tape? What’s the strange connection between the reporter’s son and the girl on the tape? And especially, why do the people on the tape dress in Victorian garb when, as we come to discover, they were alive and well in 1978?

The film is maddeningly light on answers. It’s also quite light on thrills, forgoing the blood and gore of traditional horror flicks in an attempt to reel viewers in by engaging their minds.

But the only thing running through my mind as I watched the increasingly ridiculous events unfold was this: if blurry black-and-white footage of amateurish still life images is enough to kill a person, then anyone who’s ever been witness to cable access programming – or worse, a student film – had better run for cover.

Michael Rucker is a regular contributor to Gay City News.