“After seeing The Time Machine, I wished I, too, could take a trip back in time – to avoid seeing this movie altogether.” 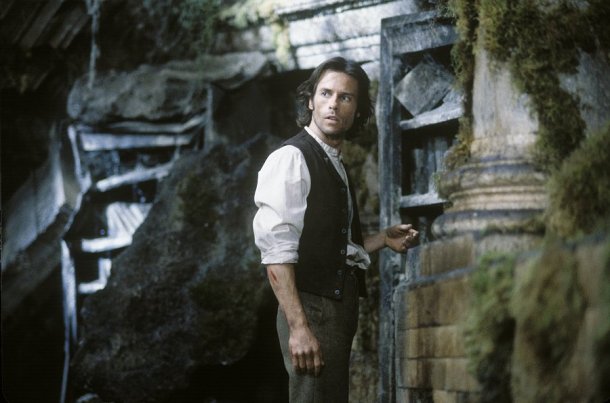 It’s always frustrating to see a film that has everything going for it but still manages to be unwatchable. The Time Machine contains all of the ingredients for a fantastic movie:  a captivating story by H.G. Wells about the coolest of sci-fi themes; a talented, sexy actor in the lead role; and the latest in special effects technology.  Yet director Simon Wells – great-grandson of H.G. himself – clearly didn’t have a very good recipe, because what he cooked up is a schlocky film featuring a gaunt and greasy-looking Pearce (doing a strange Jimmy Stewart impersonation), less-than-stellar special effects (including bad guys that look like castoff puppets from The Dark Crystal), and Orlando Jones in a Vulcan wig (enough said).   It’s an unappetizing casserole made of leftovers from better films like Planet of the Apes, The Lord of the Rings and countless others.

This remake of a 1960 film follows its predecessor’s story to an extent, but, somewhat ironically, adds a dead lover as the impetus for traveling through time. After the death of his fiancée, eccentric inventor (is there any other kind?) Alexander Hartdegen (Pearce) travels to the past to save her, but can’t.  Distraught, he heads into the future, finally landing in a post-apocalyptic cliffside village in a strange new world.  There, only one person can understand his ancient language; luckily for him, she’s a nubile native girl in a see-through blouse and chic strappy sandals (Samantha Mumba).  Despite technically being gone for less than a day, he instantly forgets his former true love and it’s Pocahontas all over again, at least until a darker side of this utopia emerges.

No attempt is made to explain time travel, but it appears to have something to do with crystals and prisms.  To be fair, there are a few truly cool elements here, including a time-lapse shot of the planet evolving over 800,000 years and an incredible plot device involving lunar exploration.  Unfortunately, there’s much more awful stuff (Orlando Jones and the aforementioned wig, for instance). Time travel is such a mind-blowing concept that I say scrap the class warfare (don’t ask) and focus on the trippy things you can do jumping from future to past and back.  I mean, how great was Back to the Future?  After seeing Time Machine, I wished I, too, could take a trip back in time – to avoid seeing this movie altogether.