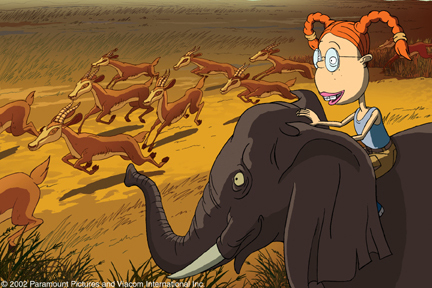 Nickelodeon’s popular animated series about a girl who can converse with animals hits the big screen in a rollicking film that combines action-packed adventure with heartfelt ecology lessons. After being shipped off to boarding school in London by her globetrotting nature documentarian parents (voiced by Tim Curry and Jodi Carlisle), Eliza (Lacey Chabert) must make her way back to the jungles of Africa to stop a pair of nefarious poachers (Rupert Everett and Marisa Tomei) from harming her animal friends, even though it might mean losing her treasured ability to communicate with them. With plenty of dry British humor to engage adults, the various chills, spills, and thrills – along with heavy doses of potty humor – should prove irresistible to kids of all ages.

Kinsey Scale: 1 (Curry donned stockings and corset as a sweet transvestite in _The Rocky Horror Picture Show_, and and out actor Everett starred alongside gay icon Madonna in _The Next Best Thing_, as did Lynn Redgrave, who gives voice to Eliza’s grandmother.  However, there’s no sexuality of any kind in this family-oriented romp.)