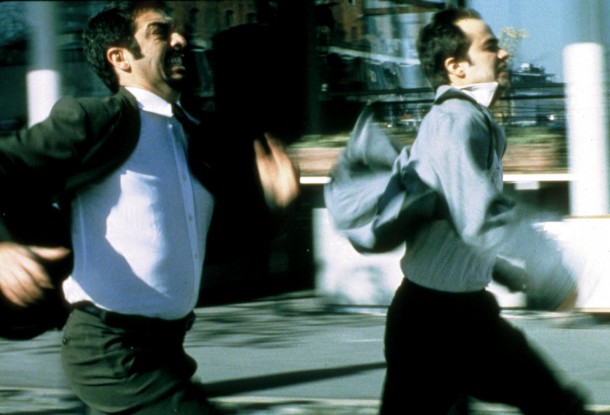 Don’t look for Varla Jean, Hedda, or Brini in Nine Queens; if you’re expecting any gender bending antics within this Argentinean import, you’ll be sorely disappointed.  The queens here are pictured on postage stamps which may (or may not) be worth half a million bucks to a pair of small time swindlers.  The fun is in trying to figure out exactly who is swindling whom.

Just when circumstances are looking grim for adorable crook Juan (Gastón Pauls), fate intervenes in the form of savvy trickster Marcos (Ricardo Darin), who saves the younger lawbreaker from potential arrest by posing as a police officer. Newly bound by their misadventures, the two agree to join forces on a scam that falls unexpectedly into Marcos’ lap.  As the two become more and more deeply involved in this mysterious undertaking, Juan grows increasingly suspicious of Marcos, until the whole operation threatens to go up in smoke.

Reminiscent of David Mamet’s The Spanish Prisoner (as well as countless Hitchcock films), Nine Queens engrosses with a clever plot that keeps you guessing.  Without relying on guns, explosions or car chases, Director Fabián Bielinsky has created a story chock full of intrigue and suspense.  With each introduction of yet another shady player, the plot thickens and the mystery increases.  None of these intentionally ambiguous characters – from a sickly old man to a hostile hotel concierge to a wealthy widow to a deceitful stamp expert – is above suspicion, because all, it seems, have nefarious intentions. Throughout, Bielinsky places us right alongside the two main characters; just when everything seems clear to Juan or Marcos, an unexpected development gives pause, sending them – and us – right back to the drawing board.

The winner of MTV Argentina’s 2001 People’s Choice Award, Nine Queens proves that – in countries outside the USA at least – smart films are appreciated as much as gross-out teen comedies and shoot-em-up action sequels.  Like The Usual Suspects or Memento, Nine Queens entertains by challenging its audience right to its revelatory conclusion (which, unlike those of The Sixth Sense and Unbreakable, isn’t an obligatory “twist” intended solely to jazz up an otherwise ho-hum story).  Engaging and intellectually stimulating, Nine Queens rises above most of the films released so far this year.  Let’s just hope American audiences are up to the task of thinking while chewing their popcorn.