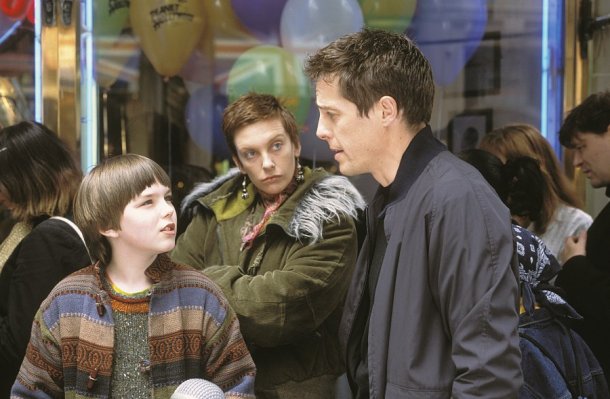 Although probably intended to break the hearts of straight women and men, About a Boy will undoubtedly have plenty of gays reaching for tissues, thanks to its near-perfect depiction of life as an outcast. A scene of a sissy-ish boy, Marcus (Nicholas Hoult), being chased home from school by a trio of bullies did it for me. As it was in my own childhood, this is a common occurrence for Marcus, thanks in part to his affinity for rainbows and his unfortunate habit of bursting into song in the middle of class. A desperately unhappy boy so unpopular even the nerds want nothing to do with him, Marcus grimly endures daily taunting and jeering by his classmates. Making matters worse, his chronically depressed mother, Fiona (Toni Collette), is so consumed by her own unhappiness she fails to recognize her her son’s misery.

Despite the gloomy subject matter, About a Boy is in fact a comedy, and a pretty good one at that. It’s actually about two boys, the other being Will (Hugh Grant), a spoiled, selfish man whose shallowness hits new heights when he strikes upon what he considers a clever idea:  dating single mothers, who will be desperate for attention. When this scheme brings Will and Marcus together, Marcus becomes convinced Will is the key to his mother’s (and, consequently, his own) happiness. With the resolve of someone who has nothing to lose, Marcus wears down Will’s resistance until a bond is formed between the two. Naturally, along the way, dues are paid and lessons are learned.

While fairly predictable, About a Boy succeeds thanks to a moving story and outstanding performances. Hugh Grant returns to the type of role he was born to play, namely, a decent fellow in a cad’s clothing. As always, Toni Collette gives a heartbreaking performance in yet another utterly unglamorous role. But Hoult, as Marcus, stands out by perfectly capturing the aching loneliness of a boy on the outside of just about everything and the immeasurable happiness gained from acquiring just one friend. Despite not technically being a “gay” film, About a Boy paints such a moving portrait of anguish and exclusion it’s a must-see for anyone who’s had to fight tooth-and-nail for even a modicum of tolerance. Poignant and funny, it’s message is summed up perfectly in a song near the end:  “I will take you as you are, please accept me as I am.”