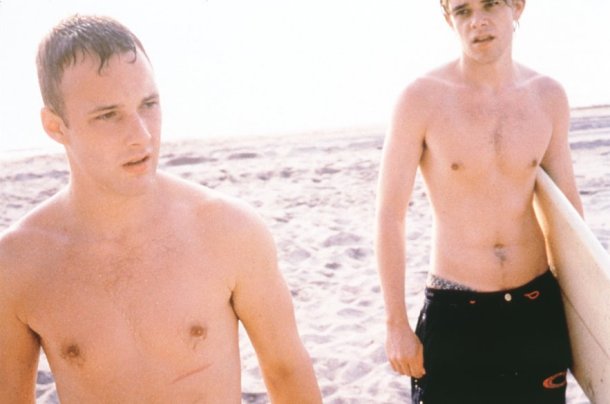 Bully bears the unmistakable stamp of director Larry Clark, who is known for his documentary-style cinematography and graphic depictions of teenage excess. Clark’s films luridly amplify teen sexuality, drug use and violence; true to form, Bully, an in-your-face portrait of a group of aimless youths, makes the crowd from Fast Times at Ridgemont High look positively virtuous by comparison.

Based on the book of the same name, Bully recounts the gruesome murder of teenage ruffian Bobby Kent (Nick Stahl) by seven of his peers, led by his best friend/whipping boy Marty Puccio (Brad Renfro). Although it’s speculated that gang activity may have been behind Kent’s death, here the narrative centers on Marty’s pregnant girlfriend, Lisa Connelly (Rachel Miner), who is presented as the mastermind behind the murder plot.

Why murder? Bobby’s cruelty toward Marty is the purported motive, but Clark has difficulty explaining the pair’s strange kinship.  Why doesn’t Marty just disassociate himself from Bobby?  Clark hints vaguely at a homosexual element to Bobby and Marty’s dominant/submissive relationship, but seems unwilling to assert the two were gay. And the film clearly implies these kids were influenced by the hard-core messages of the gangsta rap that served as the soundtrack to their lives.

Bully is a deeply disturbing movie for many reasons. But more disturbing than anything else is the absolute emptiness of these kids’ lives.  One wonders:  where are the parents?  Clark deliberately incorporates a parental presence throughout the movie to make the point that even though these adults are present, they aren’t there.  They ask all the right questions, but aren’t really interested in the answers.

Despite mesmerizing, gut-wrenching performances by the entire cast and a riveting (if sickening) fact-based story, Bully is a difficult film to watch.  But that’s just as it should be.  The subject of increasing youth violence in America shouldn’t be swept under the rug; it needs to be examined – publicized, even – so as not to be ignored. Gripping and frightening, Bully serves that purpose quite well.