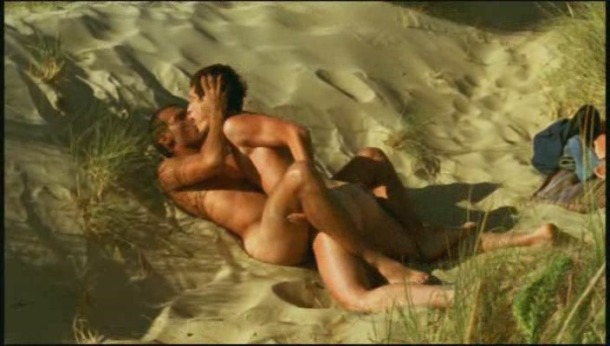 But Come Undone is much more than the sum of its sex scenes. A touching story of first love, it depicts a typical summer fling, complete with roller coasters, cotton candy and days spent lounging on the beach.  Only, this story is boy-meets-boy: Mathieu (Jérémie Elkaïm), a Parisian on vacation with his dysfunctional family, falls for local boy Cédric (Stéphane Rideau, of Wild Reeds fame) in an exotic French locale that most American teen homos can only dream about. The beautiful boys make a striking couple, and it’s a lot of fun watching carefree, extroverted Cédric coax awkward, somber Mathieu out of his self-imposed shell. Soon after Cédric turns on the charm, they’re in love; playfully wrestling in the waves and indulging in passionate sex in the dunes.

As with many summer romances, complications arise.  Foremost is Mathieu’s acceptance of his homosexuality.  Initially reluctant, Mathieu slowly becomes comfortable with himself, only to face his next obstacle – dealing with his family. But the biggest challenge for the relationship is simple geography: Mathieu and Cédric live in different cities.

The film alternates between these carefree, golden days of summer, and a much bleaker, gray winter that finds Mathieu alone, dealing with an unexplained, severe depression.  Key elements of the story are left untold, leaving it to the viewer to determine what happened in the course of Mathieu and Cédric’s affair.

The present-day struggles faced by Mathieu are ones familiar to every gay man: conflicting emotions about homosexuality mixed with depression, anger, despair, and just enough hope to get by on. Adolescence is a burdensome time for everyone, straight or gay; it’s heartbreaking to watch Mathieu strive to discover who he is while trying to understand the nature of love. Because much is left unsaid, viewers are allowed to establish their own connection with the film’s story, which is uniquely satisfying. A guarded optimism permeates the film’s poignant ending; it is the promise of golden summers to come offered by a sunny winter’s day.