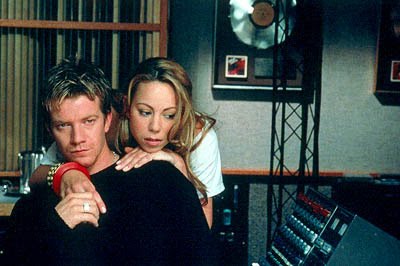 Poor, poor Mariah.  First, after a string of chart-topping singles, she releases a song that can only claw its way to #1 by having its price slashed to 49 cents.  Now, a movie guaranteed to get reviews that just might send her right back to her padded room in that undisclosed hospital. To be clear:  Glitter is AWFUL.  Think Showgirls without the high-brow story and refined performances.  Fortunately, though, it definitely falls into the “so bad it’s fabulous” category, making it more than worth your ten bucks.

Much of Glitter takes place in the kind of mythical nightclubs that only exist in movies and on Queer as Folk; clubs where straights and gays cavort harmoniously in fantabulous costumes amid never-ending cascades of confetti.  Mariah plays Billie, a little orphan girl with the voice of an angel who shoots to stardom with the help of DJ Dice (Max Beesley), her Marky Mark-ish producer/lover who, naturally, becomes jealous of her success.  The film probably gets its title from the curious stripe of sparkly silver paint – never explained, never alluded to – that appears in various places on her body like a weird, mutating birthmark.

The most artistic scenes in Glitter are its numerous transitional cityscape shots.  Elsewhere, visual gimmicks are frequently employed in an apparent attempt to divert attention from the preposterous goings-on within the film itself.  Slow-motion is used extensively to help Mariah convey a wide range of emotions including joy, romance, sorrow and pain.  Mariah, God bless her, works that trashy, slutty look like nobody else can – or would want to.   As an actress, she’s not all bad; she certainly gives Madonna a good run for her money (take that however you wish). In fact, in lighter moments, she seems quite comfortable and natural.  (And in the heavier scenes, it’s loads of fun to watch her concentrate on “acting.”)

Perhaps the only woman in pop music history to become a certified Diva without releasing a full album, Billie performs at awards shows and sells out Madison Square Garden on the strength of one “hit” single.  The absurdity reaches stratospheric levels as the film heads toward its predictable-yet-cackle-inducing conclusion.  What could be more fun than to see Mariah tottering in high heels and a beaded gown through the grassy yard of a rural home in a laughably ludicrous attempt at a poignant ending? Run, don’t walk, to see Glitter while you can.  It won’t be around for long.