“A hellish hybrid of Jerry Springer-style characters and COPS-like cinematography, Good Housekeeping boasts neither the outrageous unpredictability of the former nor the giddy, voyeuristic pleasure of the latter…” 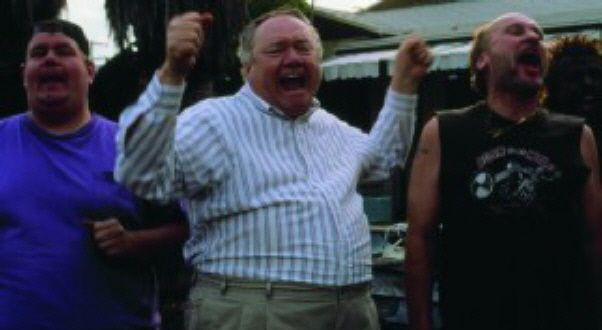 Not in My Front Yard

There’s a good chance you haven’t even heard of Good Housekeeping, which opens this week at Two Boots Pioneer Theatre. Judging by the horrendous production values of the film itself, I can’t imaging there was very much money left in the budget to advertise this god-awful waste of valuable film stock.

A hellish hybrid of Jerry Springer-style characters and COPS-like cinematography, Good Housekeeping boasts neither the outrageous unpredictability of the former nor the giddy, voyeuristic pleasure of the latter. Instead, it offers a handful of poorly sketched, white trash caricatures engaged in meaningless, repetitive activities that are neither funny nor insightful.

The paper-thin plot concerns a domestic dispute between an unemployed toy collector named Don (Bob Miller) and his forklift-operator wife Donatella (Petra Western). With neither of the hotheaded losers willing to move out of their run-down, filthy house, Don erects a wall down the middle of it to separate their lives as they await divorce proceedings.

On his side of the house, Don holds court over an assortment of wasteoids and idiots, partying every night like the jobless redneck he is. Over on her side, Donatella turns to her newly acquired lesbian lover for comfort. While Don and Donatella’s main concern is, allegedly, gaining custody of their young son, neither one of them is fit to be a parent; I kept waiting for Children’s Services to appear to rescue the boy from both of them.

So many problems riddle this film it’s hard to know where to begin. The situations are preposterous. The action is repetitive. The actors can’t act. The script, if there even was one, is severely lacking. There are no believable relationships between any of the characters. Worse, all of the characters are entirely reprehensible. With nobody to root for, there’s nothing to do but sit and endure the nonstop stream of inanity – and profanity.

Incredibly, Good Housekeeping was selected for inclusion in the Cannes Film Festival Critics Week (not, mind you, the festival itself). This was back in 2000, though, meaning it took an awfully long time for the film to find its way to theaters.  Still, Roger Ebert called it “a treasure,” and Variety extolled it as a “triumph…that hits comic highs.” After initially wondering whether they’d been shown a different version of the film than I saw, I’ve come to the conclusion they’re simply giving the film – and writer-director Frank Novak – way too much credit.

While celebrating the “white trash spirit” of the film, these critics have unfairly lumped Good Housekeeping in with the films of John Waters. True, they do share a number of qualities, but while Waters may never have been considered a skillful auteur, his films, especially his earlier ones, had an originality and freshness that Good Housekeeping never comes close to. On the contrary, this film fails to achieve any sort of innovation, relying heavily on the conventions of “reality” TV instead of attempting anything new. And when it comes down to it, The Jerry Springer Show, COPS, Fear Factor, et al are much more entertaining than this film could ever hope to be.

Further, the film misses the boat as a satire, since it never makes any sort of statement about the situations or the people involved. As he struggles vainly to get laughs, Novak doesn’t once examine the roots of his characters’ (totally implausible) behavior. Why do Don and Donatella hate each other so? Why is Donatella carrying on with a woman she has absolutely nothing in common with? What is everyone really trying to accomplish? Either Novak isn’t interested in finding out, or, more likely, he doesn’t possess the skills to convey the answers.

Michael Rucker has written for HX, Empire, and Time Out New York.