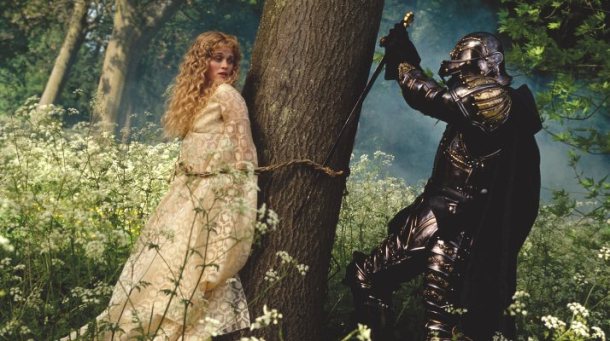 Oscar Wilde described his last play, The Importance of Being Earnest, as a “delicate bubble of fancy.” Director Oliver Parker clearly kept this in mind while adapting it for the screen. As with his previous film, An Ideal Husband, Parker directs with a nimble touch that never weighs down the effervescent plot. A tale of mistaken identity and love-fueled duplicity, the story follows best friends Algernon (Rupert Everett) and Jack (Colin Firth) in pursuit of a pair of lovely ladies, Cecily (Reese Witherspoon) and Gwendolyn (Frances O’Connor). Both men, at one point or another, assume the identity of Jack’s nonexistent brother, Earnest, to bolster their chances of winning the objects of their desire. They’re hindered, however, by an assortment of debtors, teachers and, most notably, Gwendolyn’s ferocious aunt, Lady Bracknell (Judi Dench). This being Wilde, all leads to a hilariously madcap conclusion.

The pinnacle of English wit, Wilde invested in his plays a subversive sensibility that seems remarkably contemporary even today. This modern feeling is echoed in the film, despite historical accuracy in the settings and costumes (the score, on the other hand, has a jazzy feel reminiscent of ‘70s detective shows). According to Parker, the film is “96% Wilde.”  The remaining 4% – including several medieval fantasy sequences – could easily have been left on the cutting-room floor.

Wilde’s wicked writings offer plenty of opportunities for dramatic grandstanding, and each actor rises eagerly to the challenge.  Impeccably-written zingers shoot off like bottlerockets with such astonishing frequency that many zip by unheard. Proving once again a homo can convincingly play a hetero playboy (especially in a period piece), Everett is in his element here as a dashing and duplicitous scalawag whose primary aim is to have a good time, preferably at somebody else’s expense.  The witty dialogue rolls off his tongue so naturally, it’s easy to imagine he always speaks in such flowery prose.  He’s also probably the only actor who can manage to look positively dapper while scrambling, tuxedo-clad, from a mob of angry creditors. Firth brings the perfect balance of pride and, yes, earnestness, to his role, and Witherspoon radiates, as always. Dame Judi, as the monstrous Lady Bracknell, devours not only the scenery around her, but her fellow actors as well.  Obviously relishing every opportunity to express incredulity, agitation or appall (all on the grandest of scales), her performance alone is well worth the price of admission.