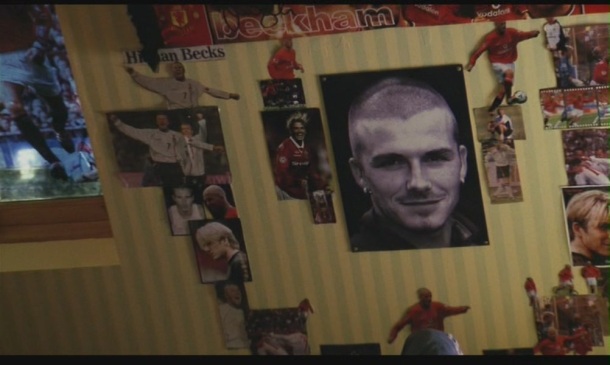 I  had a heck of a time trying to decide whether, in reviewing Bend It Like Beckham, I needed to explain exactly who “Beckham” is. On the one hand, most gay readers couldn’t name a single American football player, much less a British one – even if he is one of the biggest internationally known athletes in the world. Who cares about sports, anyway…right?

On the other hand, David Beckham – who, by the way, is incredibly hot – happens to be married to Victoria Beckham, better known to homos around the globe as Posh Spice, of The Spice Girls fame. As anyone who’s traveled to London in the past few years knows, Becks (as he’s affectionately known in the U.K.) and Posh are to England’s tabloids what Tom Cruise and Nicole Kidman used to be in America’s supermarket rags; not a day goes by in Old Blighty without some sort of update on the highly photogenic duo.

You can see why I was stumped. I guess, though, it really doesn’t matter whether or not you know who David Beckham is, because he’s not actually in the film. What you should know is that Bend It Like Beckham is one of the most charming, unabashedly exuberant British movies to hit these shores in quite some time. If you loved Billy Elliott, you won’t want to miss this giddy flick, which does for girls and soccer exactly what the previous film did for boys and ballet.

The twist here is that Jess (Parminder Nagra), whose unqualified passion for soccer is matched by her abilities as a player, has to contend not only with the prejudice targeted at girls who want to participate in a “man’s” game, but also with her family’s Indian customs. As her mother pointedly asks her, “Who’d want a girl who plays football all day but can’t make chapattis?”

While her girly-girl sister dreams only of having a traditional Indian wedding, Jess would rather hang out at the park, playing pickup games with the neighborhood boys. Things change, however, when she meets Jules (Keira Paxton), a member of a local women’s soccer league. Jules encourages Jess to try out, which she does, knowing full well that her ultra-conservative mother (the hysterically funny Shaheen Khan) and father (Anupam Kher) would never approve. When she makes the team, Jess decides to keep her participation a secret, leading to all sorts of culture-clashing mayhem.

Director Gurinder Chada has a lot of fun good-naturedly lampooning the traditional Indian lifestyle as lived in modern-day England. And although the film definitely zeros in on the East/West conflicts between first-generation immigrants and their offspring (“What did I do in my past life to deserve this,” moans Jess’s melodramatic mum at one point), ultimately, its underlying theme – parents wanting to provide a better life for their children than they had – is a universal one.

The film’s only disappointing aspect is a poorly conceived love triangle between Jess, Jules and their coach (Velvet Goldmine’s Jonathan Rhys Meyers). Early on, it looks as though the girls are going to become, shall we say, more than just teammates, which would have made for a nice – and, perhaps, more authentic – development. Sadly, the setup is played merely for laughs, as Jules’ mom (Juliet Stevenson) becomes more and more unnerved at the thought of her daughter being a lesbian (“All I’m saying is, there’s a reason Sporty Spice is the only one without a fella,” she gravely tells her husband).

Nevertheless, Bend It Like Beckham remains a certified crowd-pleaser. Even if you don’t like sports, even if you’ve never heard of David You-Know-Who, chances are, you’ll be cheering enthusiastically along with everyone else by the time the blooper-filled closing credits roll.